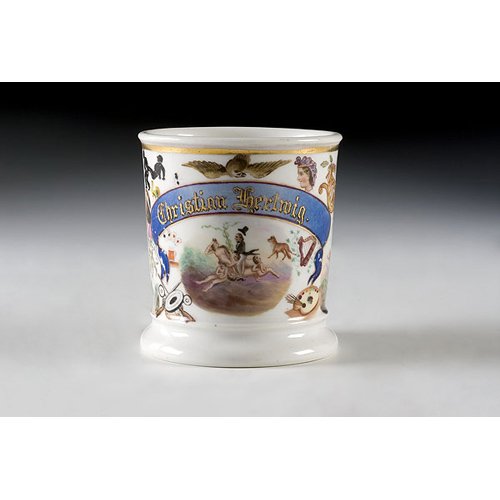 Koken China Decorator’s Personal Shaving Mug, Mr. Tolman may have been unaware of the history behind one of his finest and most unusual shaving mugs. Described in his inventory as “a mug bearing multiple symbols,” what was certainly a confusing case has been discovered as the personal mug of a china decorator from St. Louis, MO. Records indicate that Christian Hertwig was born in Germany about 1843, and arrived in New York on the Bremen 7 July 1870. It is not clear when he migrated to Missouri, but his wife appears in the 1880 census, and other Hertwigs were there prior to this time. Young Christian very likely joined the family shortly after arrival. He is listed in 1889-90 and again in 1900 as a “China Decorator” in St. Louis. He almost certainly worked for Koken Barber’s Supply Co. Additional evidence lies in the mug itself – Hertwig uses several motifs commonly employed by Koken on their personalized mugs, such as a friendship symbol, political satire and a beer mug. In addition, the mug reveals Hertwig’s creative and humorous side with many unusual symbols, certainly examples of the decorator’s skill. These include, as can best be described, a central figure holding a wand riding a mount consisting of contorted nude female bodies, a man’s head made up of female body parts, a lyre, a guitar, an artist’s pallet, several references to alcohol and hunting, a rooster, a cabin within a landscape, an eagle, and a silhouette with two individuals engaged in some sort of comedic performance. Hertwig is clearly showing off his talent. The gilt name is located on a blue banner crossing the central scene; Christian Hertwig and signed in blue on verso. Lot includes a copy of the census record.