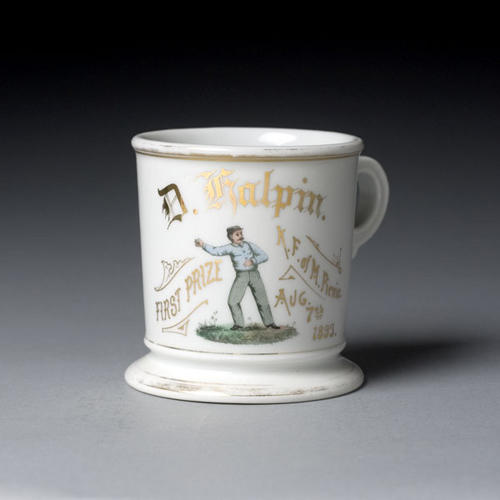 Baseball Presentation Shaving Mug, Prize Gift for Pitching Competition, porcelain, with a man in a throwing stance about to release a baseball. Written in gilt beside the scene is First Prize. K. F. of M. Picnic. Aug 7th, 1893. Gilt name D. Halpin. According to documents accompanying the mug, K.F. of M. stands for the Knights of Father Matthews, “an order established for young men interested in sports who would not drink hard liquor.” Father Matthews was clearly concerned with a vice often associated with early baseball players. D. Halpin was the recipient of a prize at one of Matthews order’s picnics. Halpin worked for the Kansas City Water Department.